The 2016 Swedish Bandy final goes to Västerås SK as they defeat Villa Lidköping BK at Tele2 Arena on March 19, 2016 in Stockholm, Sweden. In the picture Västerås number 10 Ted Bergström celebrates with the Elitserien Bandy championship trophy.

For the mast majority the game was not super exciting. Villa Lidköping found themselves going under by two goals and it looked like Västerås was going to cruise to back to back titles. Then Lidköping started to turn it around and was able to make it 2-2. At that point it looked like it was only a matter of time before they went on to win it. Västerås goal keeper Andreas Bergwall made some great saves and kept them in the game long enough for Västerås to break through Lidköpings defense again.

The match ended 5-2 for Västerås. Thanks for stopping by!

Find this post useful, enjoy checking out my photo journal? Use the donate button to send some love and buy me a beer.
Previous Post« New UI for Adobe Camera RAW Next PostTomorrow Italy meets Spain in Udine » 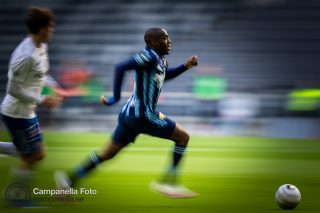