Yesterday I photographed my first football match of 2019 as Djurgården meet city rivals Hammarby IF in a quarter-final match of the Swedish Cup. The Swedish Cup has been going on for a couple of weeks now, but I was on paternity leave and did not cover any of those matches.

They played with the roof of Tele2 Arena closed which meant the entire stadium was filled with smoke and haze from all the pyro that the supporters lit throughout the match. This, in turn, meant a lot of the pictures you take are just crap.

As far as the match goes to me it seemed like Djurgården dominated the game and had the most of the changes. It never felt like they were under pressure from Hammarby or risked conceding. I was pretty impressed by what I saw. The only negative is their attack did not seem to click and it felt like they could have played all night and not scored.

Djurgården will go on to meet BK Häcken in the semi-final and on the other side of the tournament bracket you have AIK who will meet AFC Eskilstuna. This could mean that we see a Djurgården – AIK final in the Swedish Cup.

Find this post useful, enjoy checking out my photo journal? Use the donate button to send some love and buy me a beer.
Previous Post« John Lundvik wins Melodifestivalen 2019 Next PostFlorence + The Machine in Stockholm » 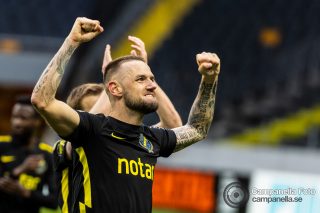 First derby of the 2021 season yesterday with AIK taking on Hammarby in Friends Arena. COVID restrictions in Sweden have limited clubs to having only 8 spectators.