Yesterday was the final Stockholm derby for this 2019 season of Allsvenskan. With Djurgården sitting at the top of the table and Hammarby in fourth place and closing in it was always going to be real tense game.

For the most part I thought Djurgården played well and was able to defend themselves from what has to be one of the leagues best offensive teams, but they made two mistakes and it cost them big time. The first goal for Hammarby at the 53rd minute and the second goal just minutes later. Right after that Hammarby captain Jeppe Andersen got himself sent off and it looked like Djurgården might pull back and tie the game. They managed to reduce the scoreline at the 74th minute but could not bag the equalizing goal.

From my, photographer perspective, this result is a nightmare. There are 3 matches left this season and the top 4 is so close that anyone can take it. On the final match day Djurgården, now in second place tied at 59 points with Malmö FF, will play away in Norrköping. Meanwhile both AIK and Hammarby will play home games, at Friends Arena and Tele2 Arena in Stockholm. Malmö will play away in Örebro. Four different venues and one of me.

Hopefully the next two match days will narrow the playing field down.

Djurgårdens IF overturns a 2-0 scoreline to finish 2-2 away to Norrköping and secure a first place finish winning the 2019 Allsvenskan season.

Mohamed Buya Turay’s goal at the 54th minute was enough for Djurgårdens IF to secure the win and pick up 3 points against Falkenbergs FF. 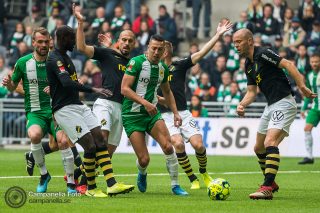 Hammarby steps into the title race