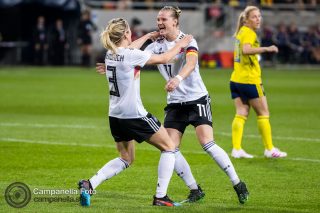 Germany too strong for Sweden

The Swedish Women’s National Team normally plays their matches out of Göteborg, but in the run to the World Cup they played against Germany in Stockholm.

Pictures from the 2013 UEFA Women’s Euro final, played between Norway and Germany and held at Friends Arena in Stockholm, Sweden.